Gender Stereotypes in the Media....This show coincides with a fabulous effort and expose by local artist Jennifer T. and the screening of the film : ' MissRepresentation '; a reflection on women and girl's portrayal in the media.…

I know it may mean nothing to 'Yipee' about, but to me, it is a big deal. I have a website. BaljeetKaur.net .It is important because when I started to paint, I would surf the net and wonder if I ever would have a site of my own. I mean you do need a certain number of artwork to put on the site, right? And somehow I could never conjure that much. Finally, I am able to set up a portal and am quite happy about it. It doesn't have a sale portal as yet because I can't make out how to add the…

Pastel and under painting. 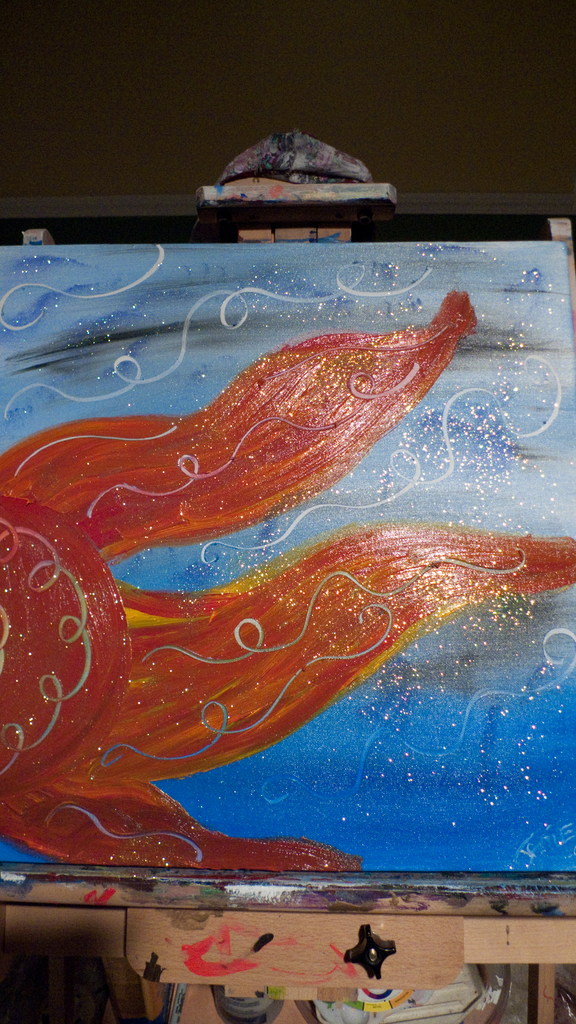 Nothing too special here, just working with oils for the 3rd time in my life. I really want to get super bright colors but have not figured out my errors. Anyhow, I am giving this to my friend as a house warming gift. I did not have anything in mind when I painted this so you can pretty much use your imagination as to what you think it is. :) I did add some Jones Tones yellow…

Hello, I need some art studio ideas. I paint downstairs then haul it upstairs to dry. I have an upstairs room that has carpet and my husband says it isn't coming out, so I need to cover a section of it for my studio corner, so I won't get paint on the floor, I am open to any ideas, thanks. 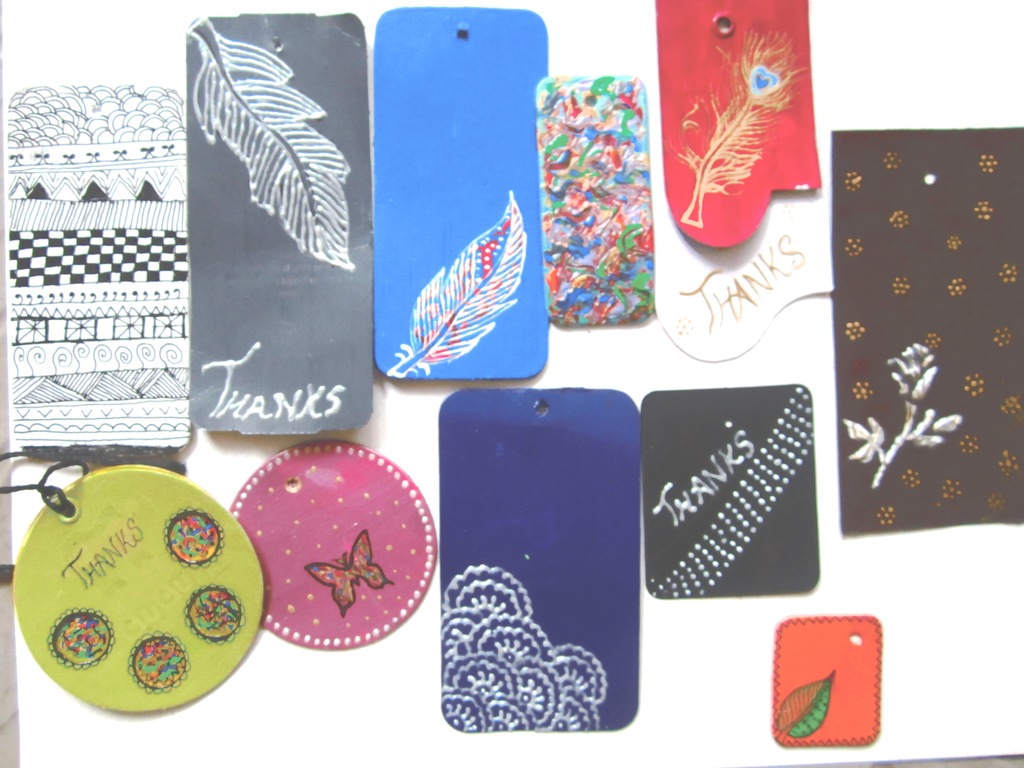 From a very small child I heard my mother tell different people "Yea we are Cajun Coon Asses, and then she would laugh". Today looking up when and why we were called Coon Asses was a a bit of a surpise to me. Below is what I found.

The origin of the term is said to have come from the French word "conasse". During the Second World War, many Cajun men served in the armed forces. When in France, many of the French heard the Cajuns speaking in a French that was both very old and in a…

I belong to that generation of artists who approach art religiously. There are self imposed laksmana-rekhas beyond which one may not tread— not for me that half baked…

Another from the class 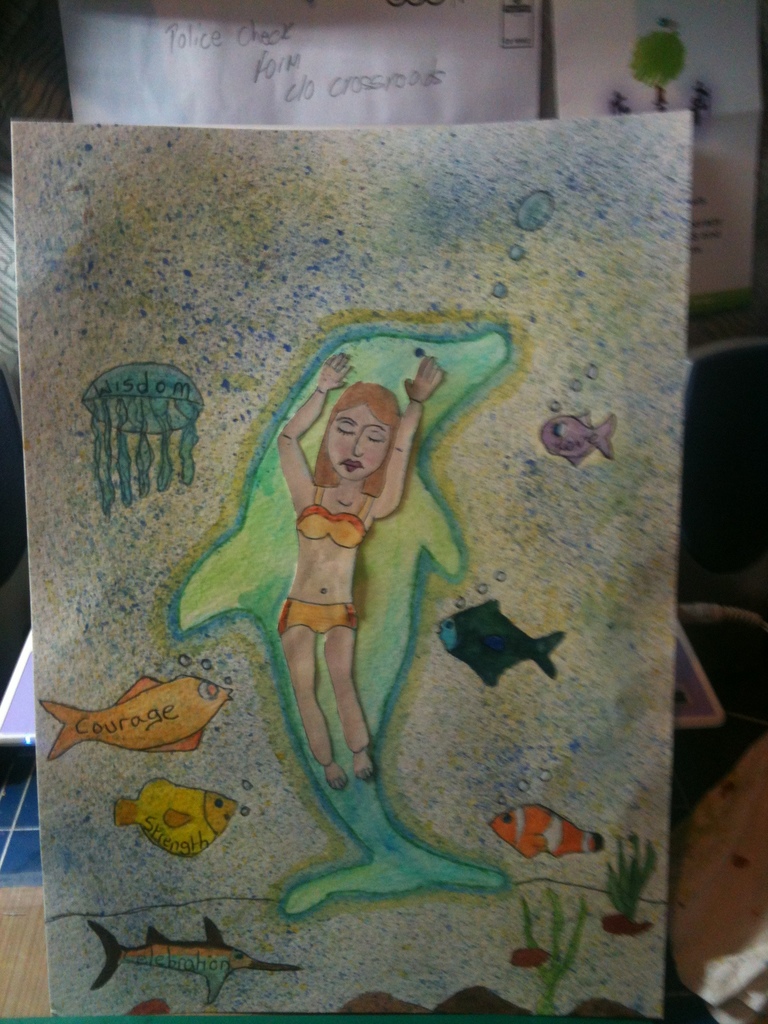 Hi, This is me

My name is Veronica but I prefer to be called Vicky. I am mum to two girls (both grown now). I have been disabled since 2003 with Osteoarthritis & Osteoporosis. In 2011 I was also told I have Ms (like I need something else). I am also Asthmatic so I guess it's the junk yard for me lol.

On a lighter note I have been making greeting cards for 10 years and I have been Art Journalling for about 3 years. I hope to post some of my work soon.

Need some Help - Feedback is much Appreciated!

Ok... so am working on my social media and think it is best to differentiate between my Art (visual arts) and handmade arts/crafts.
So I need a name for the brand/profile/shop.
Which one would you prefer? Which is easier to remember? We have a one bedroom condo in San Jose del Cabo, so I had to be creative when it comes to space for painting. I set up a corner of our deck with my easels and a couple of small tables. It is perfect that I can just leave it set up and can come and work whenever the urge hits me.…

Just to let ya’ll know there is so much you can do for Cajun Swamp people or the Madri Gras  Dotee Doll it’s driving me mad…. Yes but I love it. For the Swamp people I’ve picked out and tried out at least 4 things sha. For the doll my biggest troubles is hair yea hair. Mae I don’t know what to do. I have dat other stuff ready and waiting to be put together but hair, mae no not none. My Queen, she would sure like some. God is good sha my friend Michael Ann will be here next week and this lady…

I m sure this is a common problem with everyone living in small areas. I don't know where to keep my old canvases. I generally buy mounted canvas so I don't have to frame the work till I absolutely must. But since I m still in the process of learning, I have a lot which I can't use again; a lot of silly work on mounted canvas. I just don't know where to keep these. I mean I just can't chuck them in the public waste bin. The kitchen cabinet I use for my art supplies is full and the top of my…

I am so very excited! My last showing was January 26th and I already have another showing date booked and the prospect of having a booth at a local art festival. Oh happy day!! =D

Well I have been to two lessons and the first one was properly drawing houses with the correct perspective etc. It helped to draw the roof and the proper dimensions. The second was painting in monochrome to correctly get perspective. He also showed me that it is best to gesso the canvas in color instead of just white. Such as sienna to warm up colors like the water and sky for beach scenes. I always did white only and what a difference this makes in a painting. Then he sketches the painting… So, on Saturday I entered my first art show.  I joined a great organization in Atlanta, where I live.  They have a monthly show with a theme.  This one was "A Dash of Red".  I volunteered to help accept submissions and accept payment.  It was a lot of fun meeting people and seeing all the talent that walked in the door.

I honestly didn't expect to get selected to show, and I did not get selected.  That's okay.  I had one very nice, validating moment.  While talking with some…

My round canvases finally got their due :) when three of my abstracts got accepted for annual show of a govt. art akademy here. Needless to say i was really happy..till i saw what I was against. Some really good work was on the walls there; works that made my knees weak. I could never be that good or creative, I realized and another thing that I realized was that there was no place for whimsy paintings in my city. India is that way still quite orthodox in art. but anyway, i was happy that i…