My winter woes have turned into winter whoas! I  started the year off with a bang, declaring that I wanted to try my hand at art. Well, I have. I painted about 17 or 18 pictures in as many days.And I must say , it has been fun and certainly educational. Most of my little pictures have been well received by kith and kin,  though I know most are somewhat prejudiced by the fact that they love me and don't want to hurt my feelings. And many of my peers on The Art Colony site have been most…

It is wonderful that my art work is starting to sell. the funny thing is most of the art is 4 x 6 paintings. People buy these like crazy. March 22 my work will be in a ArtAlive  Showcase in Bay St. Louis Mississippi. I'm very excite about this. I was going to bring all my art home to Louisiana but people asked me to give this a try. One charge and anything you sell you get to keep 100% of the money. YEA!!!

OH!! March 8th in Morgan City Louisiana I will be in a art show there with a…

I learnt to paint differently at an art class - but I was the tutor! :) click on url to see the results...

Roaming rhino rollicks then runs,
Through runnel and rue,
A soft rubato ripples over the rocks,
Robust, revered is he.

One, two and three a ruck of rumbustious russet rogues,
With rucksacks filled with rifle and ruin,
Route march down the rusty road,
Each with his own ruse, they take aim.
A rubato of bullets rained down and nestled,
Deep in his rough…

THE NEW YEAR IN FULL SWING

Social media has been a blessing to me! I was recently accepted as a "friend" to one of my art role models Lee Hammond. She agreed to look at one of my portraits that I created while studying one of her books. She told me that she couldn't critique it because it wouldn't be fair to her students, which I understand. She looked at it and really did give me her opinion: She said I was doing a great job and told me she wished I would take her classes. She said I would advance very quickly! That…

Colouring Outside the Lines

When I was a child, the best thing that we ever got as presents were colouring books. We always got new crayons and books at Christmas time, and we would spend hours colouring away. There was a point at which the figure would be coloured and you tried to keep colouring inside the lines so that it would be perfect. But, for me, there was always that leftover "negative" space, outside the lines, that lay there, flat and thirsty for colour, so I always coloured that in as well. I went through…

How or where do I go to thank an Artist for their comments?

What do I do now?

I have "painted " about fifteen pictures since I started about a month ago. I've mostly been dabbling in pastels and watercolors so far, just trying to find my niche.

I always  feel odd saying "painted". about the pastels I've done, because they're chalk. not paint.But I guess that's the novice in me, showing.

My brother and his wife came to visit from Padre Island last weekend. He is quite an accomplished artist and has placed highly in many art competitions, and I value his…

If any one is doing cold wax painting Please let me know.

I can give u recipes for making the cold wax from your encaustic medium. 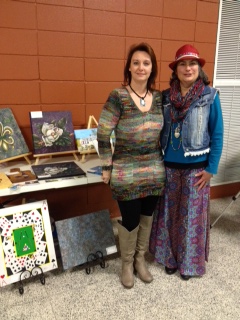 This is Caroline Simoneaux and I. We were asked   to show our art at a banquet in a town about 18 miles west of here. About 200 people attended.  The committee only picked  6 of us out of about 20 artist. We really enjoyed it but no one bought anything not even a small item. The up side is this little town is building a new liberty with an art display… I have been at this trying to learn about different kinds of art for about a month.

I have  been at this trying to learn about different kinds of art for about a month.I sketched a little when I was a  girl, a million years ago, but never seriously., and never with anything more than a piece of typing paper and a Number 2 pencil.

So here I am at almost 74 trying to teach myself by watching online videos and a using a few meager art supplies I got for Christmas. I'm propped up on my kitchen table trying to make an effort.

The response of my friends and family…

May be buying a real art studio!!!

For many years, I have contemplated buying a property in Ontario’s Prince Edward County.  Land of wineries and a very healthy Art Trail, PEC still boasts property prices that are wayyyyyy below Toronto’s stratosphere real estate. Prices are edging up, though, as more and more Toronto people buy vacation homes and retirement properties there.  I want to retire there eventually and become part of that lovely Art Trail. So……………yesterday I bit the bullet and put in an offer on a 2.66 acre…